A Warre hive is a vertical top bar hive that is simple to build and easy to use.  The cost is about one-third to one-fourth the cost of one standard ten frame Langstroth hive.  A Warre (pronounced war-ray) hive is simple to manage and maintain. Also known as tiered or supered top bar hives, a vertical top bar hive is such as the Warre hive is friendly to the bees since they are allowed to draw out their own comb. The hive is commonly under supered (nadired) which means the new hive boxes are added to the bottom and not the top of the hive. This promotes the bees natural tendency to build down ensuring a hive environment that is healthier and better suited to their own needs. 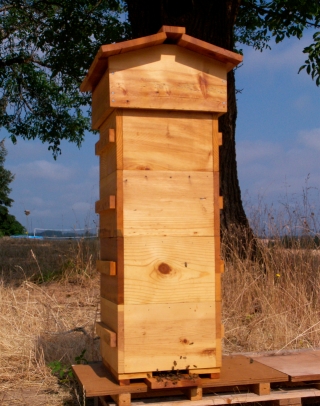 Characteristics of the Warre hive

Warre hives have a simple hive box with no frames.  The bees draw down their own comb from top bars affixed to each box.  The quilt provides a layer of insulation to the hive.  It sits under the roof on top of the uppermost box, as you can see below.

Warre hives are easy to build from materials available at your building supply shop.  The Warre hive is designed so that it will not take enormous amounts of time out of your busy schedule.  In short, the Warre Hive is a good solution for those who are interested in keeping bees simply, naturally and wholesomely without harsh chemicals or medications.

Description of the Warre hive

The Warre Hive comprises tiers of identical boxes fitted with top-bars, but no frames. Its essential design and usage features can be summarised as follows:

Image and description courtesy of the Warre English Portal

Here are some more features of the Warre Hive:

History of the Warre hive

The Warre Hive (also known as the People’s Hive) was developed in France by Emile Warré (1867-1951).  Warré developed the People’s Hive after experimenting with over 350 hives of various designs and types.   It was his goal to find a hive system that was simple, natural, economical, and bee-friendly.  The result was the People’s Hive (Ruche Populaire).  He outlined the construction and operation of the hive in his book “Beekeeping for All.”  This book is available in English as a free download. If you are interested, English Plans for the Warre Hive are also available.

Warré is not alone in his findings, though.   In 1783, a German beekeeper named Johann Ludwig Christ developed a beekeeping system almost identical to that of Warre.  And in Japan, many beekeepers still employ a similar system of beekeeping that has been in constant use since the Edo period of Japanese history (A.D.1586 to A.D.1911).

I want a Warre hive…Where Can I Get One?

There are actually a number of places you can get pre-built warre hives these day’s. A couple that come to mind are The Warre Store and Beethinking. If you don’t live in the US then you might want to take a look at Herr Thuminger and Associates. They are located in Vienna, Austria and can deliver ready made hives and hive parts to most of Europe and the UK. If you are a do it yourself kind of person then you can build your own, or download the plans and have a carpenter build a hive for you.

Check out the Warre English Portal for more info.